End of Support for Windows Vista

As computers advance so do their operating systems, bringing better user experiences and faster operations. However, such changes usually have a cost so not all businesses adopt a change unless it there is a very clear and measurable benefit. Evidence of this practice was abound when the end of life came for Windows XP, as many businesses were still using that operating system instead of Vista, 7 or 8. Waiting until after the end of support for an operating system to occur before upgrading isn’t ideal, and the difficulties such businesses encountered should be a lesson for all. 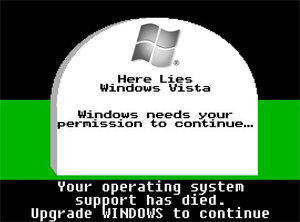 This year marks the end of support for Windows Vista. Unlike XP, Vista was not adopted in such a widespread manner. But it did bring a suite of new security features to Windows that still exist to this day. It goes to show how important security is and how much it has shaped user experience. At the time of Windows Vista’s release, many users hated User Account Control because it caused the operating system to prompt many times for a single action. Sometimes just copying a file from one place to another caused four or five prompts to appear. It was annoying, but it was an important first step to bettering computer security. Not only did UAC mean that a compromised application couldn’t access the whole computer, it promoted better coding; developers had to build their applications in ways that did not require administrative rights.

Change in this case is not a bad thing. Microsoft has learned from Windows Vista and made UAC much less intrusive. Further, application developers have learned how to code in a more secure fashion. Windows Vista may have been a rocky start to better security, but it was an important step toward a more secure computing world for businesses and personal users alike.

Posted by
The Novaworks Team
in Information Technology at 15:42
Trackbacks
Trackback specific URI for this entry
No Trackbacks
Comments
Display comments as (Linear | Threaded)
No comments
The author does not allow comments to this entry