When EDGAR Release 17.1 goes into effect on March 13, 2017, new online versions of the Transfer Agent filing forms will become mandatory. These forms, TA-1, TA-1/A, TA-2, TA-2/A, and TA-W, will become available on the EDGAR Filing Website. 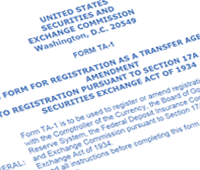 Previously these forms were part of EDGARLite and used Microsoft InfoPath templates. They will be covered in the new Form TA XML Specification. The form’s XML structure has very few changes from the previous EDGARLite version. The main difference is the forms are now combined into one specification. Since InfoPath was discontinued by Microsoft in 2014, this new method of form creation is a welcome change.

Filers can access the Transfer Agent forms by selecting the “File Transfer Agent Forms” link when logged into the EDGAR System. The web-based application will replace the EDGARLite and Microsoft InfoPath templates. This older system will be retired on March 10th. Chapter 8 (“Preparing and Transmitting EDGARLite Submissions”) of the EDGAR Filer Manual, Volume II: EDGAR Filing will also be retired. In its place, there will be two new sections to guide users through the filing process: “File Transfer Forms” and “Completing a Transfer Agent Form”. These will be added to the former Chapter 9, now Chapter 8 “Preparing and Transmitting Online Submissions”.

Filers can continue to construct XML submissions as described in the Form TA XML Technical Specification documents and submit them via the EDGAR Filing Website. The content of the forms themselves is not changing so filers will be disclosing the same information as with previous TA forms. Novaworks is planning to implement Form TA as part of the GoFiler suite before the EDGAR release. For more information, contact Novaworks support.

Posted by
The Novaworks Team
in EDGAR News, Filing Technology, SEC at 13:56
Trackbacks
Trackback specific URI for this entry
No Trackbacks
Comments
Display comments as (Linear | Threaded)
No comments
The author does not allow comments to this entry