What Does Windows 10 Mean For Business?

In short, not much. That may sound like a bad thing, but it really isn’t. In a business environment training people on a new operating system can be time-consuming and expensive. It’s sometimes just that much easier to stick with the Devil you know than to risk “upgrading” to a new operating system.


A lot of businesses were hurt when they upgraded from Windows XP to Windows Vista. That traumatic experience made the move to Windows 7 and 8 slow (particularly since Microsoft turned certain “classic” functions on their heads). Microsoft has already ended mainstream support for Windows Vista and 7, so there really is little choice going forward if you want a fully supported operating system. In fact, to unify the operating systems that are out in the field, Microsoft is already offering a free upgrade for certain Windows platforms to Windows 10.

Our impression of the new Windows is simple: cut ties with XP, throw Windows Vista in the garbage (if you haven’t already), trade in Windows 7, and skip Windows 8. There’s a new operating system in town, and it’s a breath of fresh air. 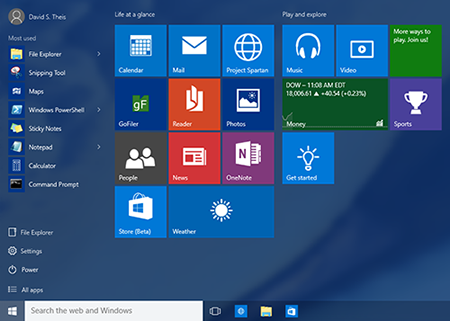 For anyone who used Windows 8 when it came out, do you remember trying to figure out how to turn off the computer? Such a simple operation that has always been in the Start menu since Microsoft first released it in Windows 95 was just gone.

The last thing any business needs - no matter how large or small - is to roll out a new OS only to have the IT department inundated with stupid questions like: “How do I turn off my PC?”. Even worse, you could suddenly have employees unplugging the computer because it’s easier. That’s not an ideal situation. The problem with Windows 8 was that it was completely unfamiliar; and even people who have gotten used to its oddball mobile-esque interface still get tripped up trying to do simple things like, say, close the picture viewing app.

This is where Windows 10 shines. It’s a great marriage of the old and the new. Rather than completely disregard 20 years of Windows experience like its predecessor did, Windows 10 has an interface that is similar enough to older platforms (like XP and 7) that users can pick up and use it without much trouble.

And the start menu is back to being an actual menu with commonly used items!

The “Live Tiles” from Windows 8 and 8.1 are still available and visible but they are now only part of the menu (visible on the right side of the screenshot above, while the start menu items are on the left). Those oddball “Metro” style apps now run like all other applications, which means they are easier to close and navigate.

Windows 10 is also a great-looking operating system. The actual look of the operating system is very similar to Windows 8, which impressed us with its clean lines. The only difference is that the borders on most windows have been reduced dramatically, which helps mitigate the dead space the larger borders created.

The biggest improved feature for business is the Quick Access tool in Explorer. You might remember this feature in previous versions of Windows, but it had a different name: “Favorites”. Vista introduced it as “Favorite Links”, but you couldn’t do anything with it. Windows 7 slightly improved on it by allowing you to at least add folders to it, but the interface was clunky and counter-intuitive.

Windows 10 has eliminated the poor execution of this idea and re-imagined it as the Quick Access tool. To add a folder to the Quick Access bar, you just pin it. Once its pinned, the folder will be just a click away on any Open or Save dialog. For any department that uses multiple network locations, this feature will save a lot of time. 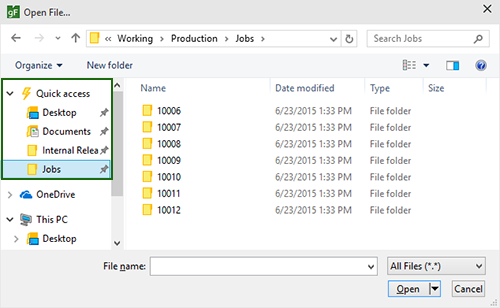 Another nice feature is the notifications pane. The new pane is a lot like the notification panel on a phone. It has recent messages from applications as well as common settings. While this feature is admittedly more useful on a portable device, the pane is still a nice addition because it consolidates all those irritating pop-up messages that used to appear near the system tray. Since these messages are now all available on the notifications pane, you don’t have to stop what you’re doing to read the message the second it appears (for fear of missing it and never being able to find it again). With the pane, you can read them all and keep a history of them. They don’t go away until you clear them. 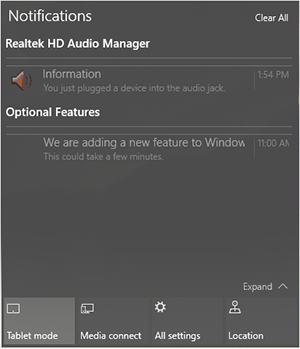 Windows 10 also allows for users to have multiple desktop areas in a manner similar to Apple’s Mission Control feature in Mac OS X (based on Linux’s virtual desktops). What this means is that you can create a secondary desktop area where you can open specific programs to work on projects. If you’re a user that tends to have a cluttered desktop, this is a possible solution to having a lot of open windows.

For users that like to multitask, this feature can help you stay organized. Unfortunately, this feature has the potential to be abused. Instead of hiding Facebook in a separate window, your users could now potentially hide a slew of non-work related items in a virtual desktop. Your IT team will possibly have to tighten up control over what your network computers can access to head off slacking before it becomes an issue. Overall, however, this new feature has the potential to be a helpful tool in your work environment.

Now for the not so great. Many of the common settings have been moved into a more mobile-friendly format. While this is good in the long term as it makes the settings across all the Windows devices the same, it does mean that users will need to learn the new layout. These settings are also still available using the Control Panel but the Control Panel and the new Settings app have different layouts and also group certain settings differently. Undertaking a simple task like adjusting a printer setting could require a little more effort and searching for users not familiar with the new Settings feature and having both versions of the settings available to users could result in confusion.

The new Windows Settings feature also always sits on top of everything, including the Task Switcher. This is hopefully something that will be changed in the future.

We liked the look of the new OS, but other users may not. While you can change the theme of the UI, there doesn’t seem to be a way to bring the borders back unless you’re specifically using a high contrast theme. For companies that want to take the approach of keeping the OS looking as close as possible to their current version of Windows, you’re not likely to be able to make that happen, at least as of the Windows 10 preview.

The fact that users can set the Windows 10 Office Assistant, Cortana (more on her later), to constantly listen for the phrase “Hey, Cortana” could be a security issue in the long term. Even if the sound it is collecting is never transmitted off your computer, malicious software could access it. In an enterprise environment, the IT department may want to disable microphones or use the group policy to disable Cortana completely. 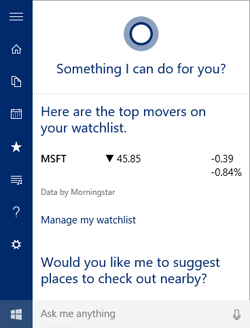 The digital assistant Cortana has also been added to Windows 10. Windows phone users are familiar with Cortana’s uses. For those who don’t have a Windows phone, Cortana is meant to be an assistant. If Siri had a child with Clippit (also known infamously as Clippy), you’d probably end up with Cortana.


Thankfully, Cortana is a little more useful. You can tell her to set reminders, add events to your calendar, and even text and call people if your device supports it. The functionality of Cortana on the desktop version in Windows 10 is essentially the same as the version you can get on your Windows phone.

Unfortunately, in a desktop setting, Cortana’s usefulness is pretty diminished. Part of the reason phones have the personal assistant software is to interpret voice into commands/text for the phone to use. This is not needed in a desktop environment, where you already have a full keyboard at your fingertips. Would you really want your entire office talking to their computer? Probably not. Cortana is still useful on the desktop (even more so if you have a Windows phone) – just not as important as it is in the mobile world.

It’s an addition that Microsoft probably spent a lot of time on, but as it is, Cortana doesn’t have a lot of applicability in a business setting. She can set a reminder or a task up for you quickly, but you’re less likely to need to use voice commands to search for a webpage or a file when using a desktop. The fact that you can write commands to her in English is nice but again you could spend that time creating the task or searching for an item manually.

Overall this edition of Windows looks like a welcome change. It is a good mix of the technology you know and new features to help you and your staff get work done faster. There are a lot of features and improvements we didn’t cover (including a number of much-needed improvements to the Command Prompt), and, while the preview version of Windows 10 had some bugs in it, we expect most of them will be resolved before its official release.

Another advantage, less obvious to users who only work with Windows desktops or laptops, is that Windows 10 will be available in various scaled incarnations for everything from Internet of Things (IoT) to mobile phones. In a technology environment where power users have to bounce between dozens flavors of Andriod, iOS, Windows, and Linix, this may be a blessing in the long run.

In conclusion, you’re not likely to regret upgrading to Windows 10. In fact, you might just find it helps your workers stay connected and organized.

Microsoft has scheduled the official release of Windows 10 for July 29, 2015.

Posted by
David Theis
in Information Technology at 10:42
Trackbacks
Trackback specific URI for this entry
No Trackbacks
Comments
Display comments as (Linear | Threaded)
No comments
The author does not allow comments to this entry