A new form for money market funds that was finalized by the SEC in Release 33-9616 (Money Market Fund Reform; Amendments to Form PF) recently became effective for filing to EDGAR. This form, Form N-CR, has raised questions from preparers and registrants alike who want to know more about the form, when it should be filed, and how to file it.

Form N-CR was adopted as part of a broader money market reform that was finalized by the SEC on July 23, 2014. This form requires money market funds to disclose certain information when a significant event (as specified by the SEC) occurs. Such an event could include the following: a portfolio security defaults, an affiliate provides financial support to the fund, the fund experiences a significant decline in its shadow price, or liquidity fees or redemption gates are imposed or lifted. Form N-CR is filed to the SEC pursuant to rule 30b1-8 under the Investment Company Act.

Form N-CR is immediately disseminated and made public on EDGAR when it is filed LIVE. 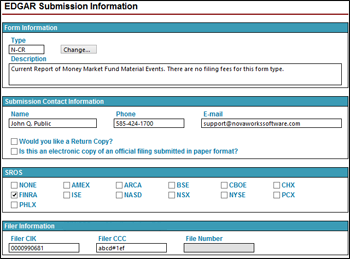 Like most EDGAR forms, Form N-CR has a primary document that is prepared in either HTML or ASCII (text) as specified in the EDGAR Filer Manual. This document is then included inside an XML document that contains general filer information. In the case of Form N-CR, this XML document will also collect such information as the registrant’s investment company type and, if applicable, series and class information.

This XML document is what filers can compose and edit using the SEC’s EDGARLink Online application. GoFiler also creates this XML document in addition to being able to create, convert and edit HTML and text. With GoFiler, the assembly and submission of Form N-CR is easier and faster.

The primary document of Form N-CR contains various parts with items that the filer must complete. Part A of the form, which collects general information about the fund, must always be completed by the filer. Parts B through H of the form collect information about the event or events that caused the Form N-CR to be filed. Filers must respond to the items in these parts as applicable.

When the Form N-CR document has been authored and all of the applicable items completed, it must be converted to the appropriate EDGAR HTML or text, assembled with the Form N-CR XML form data, and submitted via EDGAR.

The GoFiler software has all the tools needed to create both the primary document and the filing. GoFiler can also submit your Form N-CR filings directly to the SEC. If you’d like more information about GoFiler or about Form N-CR, please contact our team at support@novaworkssoftware.com.

When the SEC makes changes to existing forms or creates rules that require filers to use new forms to submit data to EDGAR, Novaworks is always ready to respond. GoFiler was ready to file Form N-CR on the same day that the form became effective.

Posted by
The Novaworks Team
in Filing Help at 11:26
Trackbacks
Trackback specific URI for this entry
No Trackbacks
Comments
Display comments as (Linear | Threaded)
No comments
The author does not allow comments to this entry