During the June 28th Open Meeting, the SEC voted to expand the definition of “smaller reporting companies” (SRC) to allow for more companies to qualify for certain existing scaled disclosure accommodations. The SRC category was established in 2008 in an effort to provide greater regulatory relief for smaller companies, as SRCs can provide scaled disclosures under Regulations S-K and S-X. 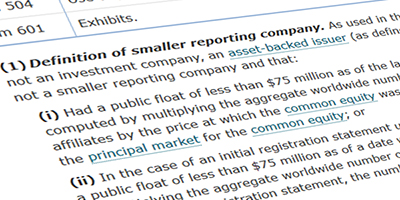 The new amendments enable a company with less than $250 million of public float to provide scaled disclosures. This is a large increase compared to the $75 million threshold of the current definition. In addition, companies with less than $100 million in annual revenues with either no public float or a public float that is less than $700 million will also be considered a SRC. This is again in comparison to the prior definition, which allowed companies to provide scaled disclosure only if they had no public float and less than $50 million in annual revenues. Raising the thresholds of the SRC definition is intended to promote capital formation and reduce compliance costs for smaller companies.

The revisions are outlined as follows:

With these changes, the SEC estimates that an additional 966 companies will become eligible for SRC status in the first year. In addition, the Commission is proposing amendments to Rule 3-05(b)(2)(iv) of Regulation S-X that will increase the rule’s net revenue threshold from $50 million to $100 million. Because of this, companies may be able to omit financial statements of businesses acquired or to be acquired for the earliest of the three fiscal years otherwise required by Rule 3-05 if the net revenues of that business are less than $100 million.

These rules will become effective 60 days after publication in the Federal Register.

Posted by
The Novaworks Team
in SEC at 16:44
Trackbacks
Trackback specific URI for this entry
No Trackbacks
Comments
Display comments as (Linear | Threaded)
No comments
The author does not allow comments to this entry