The SEC adopted the final rule allowing companies to offer and sell securities through crowdfunding on October 30, 2015. These new rules (Regulation Crowdfunding) require companies who opt to raise money through crowdfunding to provide the SEC with new disclosures via EDGAR and are expected to take effect during the second quarter of 2016. 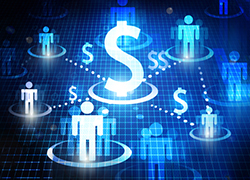 Crowdfunding is a method of raising capital via the Internet as a means to fund projects and grow businesses. Title III of the Jumpstart Our Business Startups Act (the JOBS Act) created a federal exemption that allows crowdfunding to be used to offer and sell securities. The rule adopted by the SEC will enable smaller companies new ways to raise capital from individuals. Prior to this new rule, private companies could only offer securities to “accredited” investors – those individuals who own more than $1 million in assets or have maintained an income of at least $200,000 for two or more years. With the new crowdfunding rules in place, individuals who have an annual income of less than $100,000 will be able to purchase securities offered via crowdfunding.

Crowdfunding must be done using a broker-dealer or a registered funding portal. Forms enabling funding portals to register with the SEC will be effective January 26, 2016.

How Much You Can Crowdfund

Companies will be able to raise up to a maximum aggregate amount of $1 million through crowdfunding in a 12-month period. This amount includes securities sold by any predecessor of the issuer during the 12-month period.

How Much You Can Invest

Investors will be limited to investing in a certain amount of offerings in a 12-month period across all issuers. The maximum amount an investor can invest is:

Investors would generally not be able to sell securities purchased via crowdfunding for a year.

What You Need to Disclose

Companies who engage in crowdfunding are required to provide disclosures to the SEC using a new EDGAR form and also make that information available to investors, potential investors, and the SEC-registered intermediary being used to perform the crowdfunding.

Companies will be required to disclose the following (among other information):


On-going disclosures and annual reports are also required for companies. These disclosures would be made on a new XML form called Form C and submitted to the SEC via EDGAR. Form C would be used for each type of crowdfunding disclosure.

Certain companies would be ineligible for crowdfunding, including the following:

Posted by
The Novaworks Team
in Filer News, SEC News at 13:27
Trackbacks
Trackback specific URI for this entry
No Trackbacks
Comments
Display comments as (Linear | Threaded)
No comments
The author does not allow comments to this entry