Looking Ahead to 2016: Four Things You Can Expect from the SEC

The SEC adopted a number of new regulations in 2015 and many of them have rules and new EDGAR forms that will become effective in 2016. In the first and second quarter of next year, expect a number of changes to EDGAR to accommodate these changes. 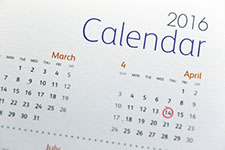 New Forms N-MFP1 and N-MFP1/A will become effective April 14, 2016. These new forms incorporate broad changes to Form N-MFP reporting that were adopted by the SEC in July of 2014 in their Money Market Fund Reform rule (SEC Release 33-9616).

When Form N-MFP1 becomes effective, filers will no longer be able to submit Form N-MFP to EDGAR. Similar to the current Form N-MFP, Form N-MFP1 will be an XML form that can be constructed using third party software (such as GoFiler Complete or GoMFP). Form N-MFP1 data will be automatically disseminated by EDGAR when a live filing is accepted.

EDGAR 15.4 which is slated for release on December 14 of this year will enable broker-dealers to submit Part III of Form X-17A-5 in electronic format. Part III will continue to be accepted by the SEC in paper format.

New Form C forms will be available on EDGAR to submit filings necessary to comply with the SEC’s Regulation Crowdfunding. These forms will collect data about the issuer and about the purpose of the offering. Form C forms will be XML forms that can be constructed using free tools provided by the SEC via EDGAR or by using software like GoFiler Complete, which will include a new Form C View that will enable users to create, edit and file all of the Form C forms.

You can read a recap of the Regulation Crowdfunding rules in a previous post on the Novaworks blog.

At the 34th Annual Current Financial Reporting Issues Conference, SEC Commissioner Piwowar discussed XBRL and the impact it has had on filers. A main focus was how XBRL data is currently used and additional potential uses for XBRL data, but the Commissioner also addressed the extra burdens providing XBRL has placed on filers. He urged the Commission to perform a costs and benefits analysis of inline XBRL.

With inline XBRL, the official HTML document would also contain the XBRL information as opposed to the current XBRL reporting standards which require filers to prepare separate XBRL exhibits. Inline XBRL does have the potential to reduce the burden of preparing XBRL on filers, although requiring filers to learn a new format could be problematic and result in another rocky transition period. Expect more discussions about XBRL this year as well as more attention on the possibility of moving toward inline XBRL as the SEC takes a critical look at their XBRL requirements.

You can read the entire speech by Commissioner Piwowar on the SEC’s website.

Posted by
The Novaworks Team
in EDGAR News at 11:27
Trackbacks
Trackback specific URI for this entry
No Trackbacks
Comments
Display comments as (Linear | Threaded)
No comments
The author does not allow comments to this entry