SEC To Approve 2014 US GAAP Taxonomy

The SEC will approve the US-GAAP 2014 Taxonomy on June 16th of this year. Because the EDGAR System will only accept XBRL reports that use the two most recent taxonomies released by FASB and approved for use by the SEC, this means that XBRL filings that use the US-GAAP 2012 Taxonomy will have the XBRL portion of the submission truncated when they are filed after June 16.


With each new year the Financial Accounting Standards Board (FASB) releases an updated version of the US-GAAP Taxonomy (UGT). These new releases are not meant to increase the work of filers but rather to improve the quality of XBRL reporting. Changes in the taxonomy include not only Accounting Standards Updates (ASUs) but also incorporate feedback from the filing community. Even though the SEC is slow to adopt the new taxonomy (it’s been almost six months since its initial release by FASB), it is important for companies to review the taxonomy ahead of time to see what is new and give feedback on the changes.

For many filers, this won’t be an issue. Based on an analysis of the first quarter filings transmitted to EDGAR in 2014*, only 7.42% of reports are still being submitted using the 2012 taxonomy. 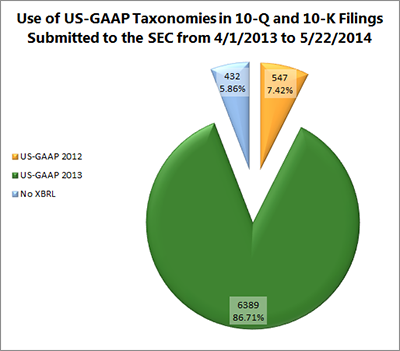 If you aren’t filing using the 2012 taxonomy, then you’re already familiar with the idea of transitioning to a new GAAP taxonomy. But you may have questions about how to smooth that transition or perhaps the elements you used between 2012 and 2013 weren’t affected by any changes to the taxonomy and you’re facing a different challenge this year.

The 2014 UGT introduces many new elements that either come from ASUs or feedback from the community. The latter is actually where the majority of these new elements originate, which is good news for the filing community. FASB is listening to your concerns and addressing issues to improve the taxonomy to help filers more easily represent their financials in XBRL.

Documentation and label changes: The update also includes many documentation and label clarifications based on user feedback. The documentation labels for approximately 500 elements that pertain to maturity schedules were changed to clarify the appropriate use of elements. Documentation labels were also changed to clarify the meaning of a concept, to correct grammatical or spelling errors, to remove unnecessarily restrictive wording, to correct inconsistencies between the labels and the definitions of elements, and to incorporate new ASUs. Additionally, a number of elements had their standard, period start, period end, or total labels modified to better identify their intended applications.

So what does this mean for registrants and preparers?

The simplified calculation linkbase should aid preparers in making better decisions during element selection. Additionally, FASB took many comments and concerns from the public into consideration in modifying documentation and labels to help clarify concepts and elements, which should be helpful in identifying problems with element selection in your company’s financials.

Changing taxonomies can be a time consuming affair depending on how your original XBRL was created. If you find that many of your element choices have become deprecated, you may wonder: “Why did they do that?” and “What should I do?”. Continuing to use a deprecated element is the easiest choice; after all, the element will remain in the taxonomy for two years. But it is never the best choice.

Elements are deprecated for good reasons. Sometimes the reason is simple: the element is redundant or has been superceded by a newer element. Other times, elements could be deprecated because they are no longer needed due to an ASU or because their use by the community was infrequent. In any case, ignoring the problem is just going to make thing worse. It will be more work in the long term to update your filings if you wait until the last minute to transition to new taxonomies.

As an XBRL preparer, you should use this adoption time to find out how the elements you use have changed. The best approach to updating your filings to the new taxonomy is to read the changes when it affects an element you have previously used and you can do this using the taxonomy itself. The label linkbase is updated each release with information on how the linkbase has changed. For example, the “Deprecated Label” contains the reason the element was deprecated and even possible replacements. The “Change Label” describes why the label has been changed. Knowing where to look can save you time before the filing deadline.

FASB’s taxonomy release notes also often state the reason for deprecating an item and also include information that should help you decide what element or elements to use in its place. The release notes are a helpful resource if your financials are affected by any recent ASUs.

Take advantage of the resources FASB has to offer and start reviewing the taxonomy as soon as possible. Procrastination will only make your transition more painful. You can also take the time to become more involved in the XBRL filing community. Being part of the XBRL community is more than just using XBRL. Become a member of organizations like XBRL US and participate in committees like their Best Practices Committee. These resources are a great way to improve your own XBRL filings and improve the data quality being provided by the community as a whole.

While it may seem like your concerns are going unnoticed, FASB is listening. They are making changes based on community feedback, so now is the perfect time to participate and let your voice be heard. As a community, we can work together to shape the landscape of XBRL reporting and bring to the forefront the issues that are most important to the filers.

Additional Resources:
http://www.xbrl.us
Posted by
The Novaworks Team
in EDGAR News, SEC at 13:33
Trackbacks
Trackback specific URI for this entry
No Trackbacks
Comments
Display comments as (Linear | Threaded)
No comments
The author does not allow comments to this entry